Subacute ruminal acidosis (SARA) is a typical problem on modern dairy farms. The dangerous ruminal hyperacidity is due to an increase in the concentration of volatile fatty acids, which depresses the pH value to a level that is unfavourable for ruminants.

This disrupts fermentation and has a negative impact on the animal’s health and performance: feed intake is reduced, as are milk yield and milk fat content, and affected animals are more susceptible to infection and have a greater risk of fertility problems as well as secondary illnesses such as of the udder and hooves.

Effect of Anta®Phyt on factors that can trigger SARA

A scientific study investigated how the phytogenic feed additive Anta®Phyt affects a drop in the ruminal pH of heifers. For this purpose, the heifers were fed a high-starch diet, which induces SARA. The heifers (initial weight: 556 kg) were divided into two groups: the TMR of one group included Anta®Phyt while that of the control group contained no feed additive.

Continuous measurement of the ruminal pH clearly showed that Anta®Phyt has a beneficial effect. On average, the animals in the control group were below the threshold pH value of 5.6 for 199 minutes per day. The application of Anta®Phyt reduced this period to a mere 18 minutes per day, a difference of around three hours (Figure 1), which corresponds to a 91% reduction in the daily duration below the SARA threshold ruminal pH. Furthermore, Anta®Phyt increased the average minimum ruminal pH from 5.40 to 5.62. 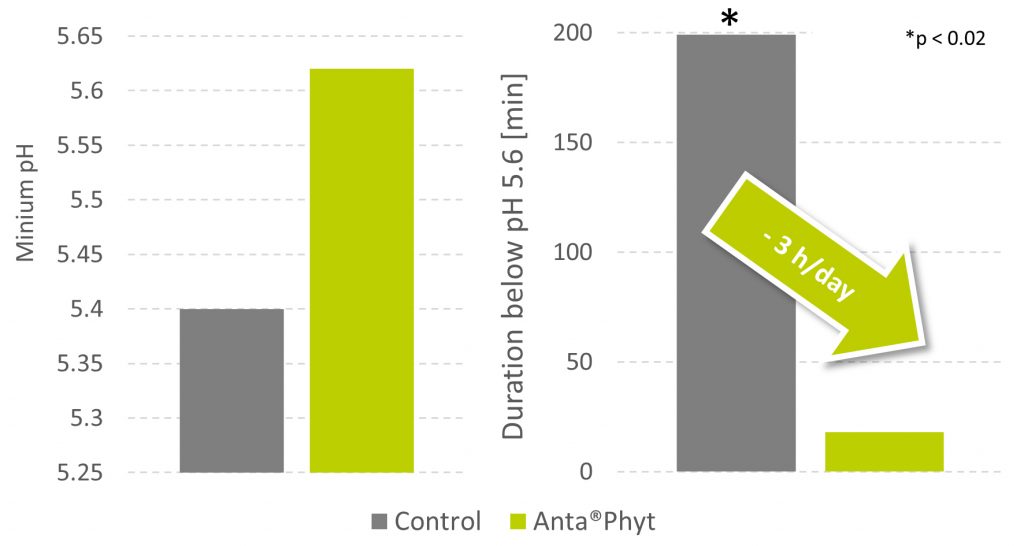 In addition to the ruminal pH, acute-phase proteins in the blood, which are inflammatory parameters, were analysed. For this purpose, the concentrations of serum amyloid A (SAA), lipopolysaccharide-binding protein (LBP) and haptoglobin (Hp) were determined. The significantly lower values (Figure 2) show how Anta®Phyt reduced inflammation. 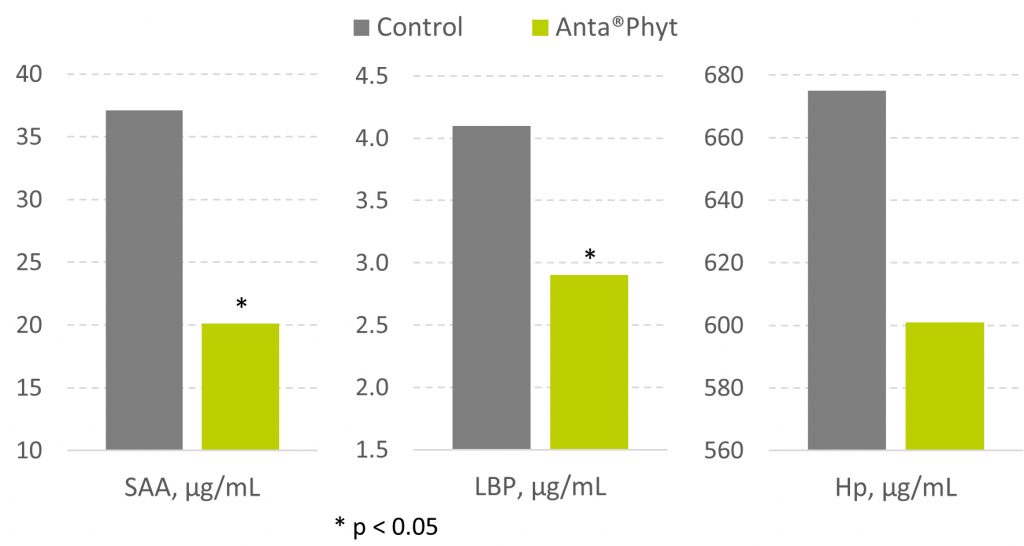 This trial confirmed the beneficial effect of Anta®Phyt on ruminants: the average minimum ruminal pH was increased in conditions that would normally trigger SARA and the duration of a ruminal pH below 5.6 was decreased by three hours per day in comparison to the control group. Consequently, Anta®Phyt significantly reduced the risk of SARA in the trial. It also significantly reduced inflammation in the animals.

Thus, Anta®Phyt critically contributes to a stable rumen and fewer inflammations. This improves performance and animal welfare, and is thus beneficial to both the animal and the farmer.