Pigs should keep their tails. At least, that’s the intention of the new action plan to dispense with docking aims to do just that. This means that livestock farmers will no longer be permitted to cut their piglets’ tails needlessly. Livestock farms that continue to dock pigs’ tails must submit a declaration that includes veterinary medical evidence justifying such docking. This action by the federal states is in response to the EU’s call to ban non-curative interventions.

The declaration must also include a risk analysis documenting the measures adopted to better avoid tail biting and other injuries. Alternatively, livestock farmers may keep a control group consisting of undocked animals. If this control group is successful, the number of undocked pigs should be increased incrementally.

Tail biting is actually one of the greatest challenges in pig production: it adversely affects the animals’ welfare, resulting in injury, necrosis and rejection. However, public perception of the preventive removal of pigs’ tails is that it is a purely profit-driven practice, which puts agriculture and the meat industry in a bad light. And this is precisely why it is desirable that tail docking be dispensed with altogether in the long term.

Thus, a sustainable and humane solution to the problem of tail biting must be found. In any case, an increase in injuries cannot be the desired effect of the action plan. Apart from the aforementioned health problems, this would also be detrimental to livestock farmers: fewer marketable animals, higher treatment costs and reduced performance due to increased stress.

The causes of tail biting have not yet been fully understood. However, what is certain is that many determining factors are involved, including stocking density, barn climate, health and above all stress. In addition to long-term, fundamental changes in the production system (premises, management, ventilation and herd size), there are other measures available to pig producers. And a major determining factor is feeding.

The right feed additives could help counter stress. They help support and strengthen the animals against daily stressors such as disease and environmental factors. They ultimately benefit meat quality too, because only vital and healthy animals are happy animals that show the best performance.

A case in point is a novel feed additive that increases the animals’ resistance to stress, which was tested at an experimental farm in Schwarzenau. It is a combination of specially selected hop components and a highly available form of magnesium.

Hops (Humulus lupulus) are traditionally used as a natural medicine for humans: specific components of the plant have been proven to relieve stress. They act on the central nervous system, producing a calming effect and contributing to a good night’s sleep. And it is these highly effective components of the hop plant that must be used specifically here, as in the case of the specialised feed additive MagPhyt. MagPhyt combines hop components with another critical element in combating stress: magnesium.

Magnesium has been considered an anti-stress mineral for decades. It reduces stress-related hormones, such as those released in increased amounts in pigs during transport. Highly bioavailable magnesium sources reduce the effects of stress. Experts believe that introducing magnesium improves the ability to cope with stress due to its effect on the nervous system.

The aim of the aforementioned investigation was to evaluate the effect of a feed additive consisting of specific hop components and highly bioavailable magnesium (MagPhyt) on performance and injury in piglet rearing.

The efficacy was demonstrated in an independent study by the Bavarian State Research Center for Agriculture (LfL). This feed additive is a specific combination of select hop and highly bioavailable magnesium compounds (MagPhyt, Dr. Eckel Animal Nutrition, Niederzissen, Germany).

A total of 80 piglets were divided into four equal groups (Table 1). The animals were subjected to two feeding phases: Phase I – up to 16 kg live weight; Phase II – up to approximately 28 kg live weight. The control feed consisted of wheat, barley and soybean meal, and the additive replaced the wheat at a proportion of 4 kg per tonne. Introducing the feed additive increased the magnesium content of the diet from 2.2 to 2.8 g/kg in Phase I and from 2.2 to 2.6 g/kg in Phase II. Weekly assessments of the faecal consistency, which were carried out because higher magnesium levels could have a detrimental effect, showed that it was normal in all groups (score 2).

The degree of tail biting in piglets in Group 1.2 and Group 2.2 (undocked tails) was assessed by the same person twice a week. The applied scoring was developed by the LfL in earlier studies.

The average daily gain of the groups over the entire study is shown in Figure 1. It was observed that the groups receiving the additive performed better than the respective control groups. Both docked groups also showed a higher daily weight gain compared to the undocked piglets. Overall, the daily weight gain of the piglets receiving MagPhyt was significantly higher compared to the other groups (+10.6% compared to the undocked control). Another significant result was that this feed additive increased the performance of the undocked piglets to the same extent as that of the docked ones. 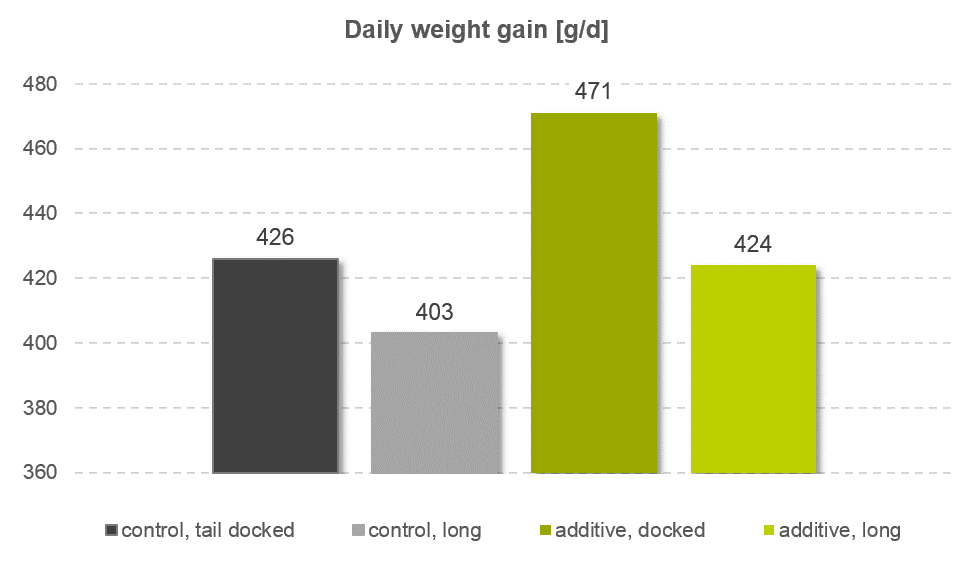 All assessment parameters in the treatment group improved in comparison to the control group. Therefore, treatment with the feed additive had a beneficial effect on the following stress-related behavioural problems. 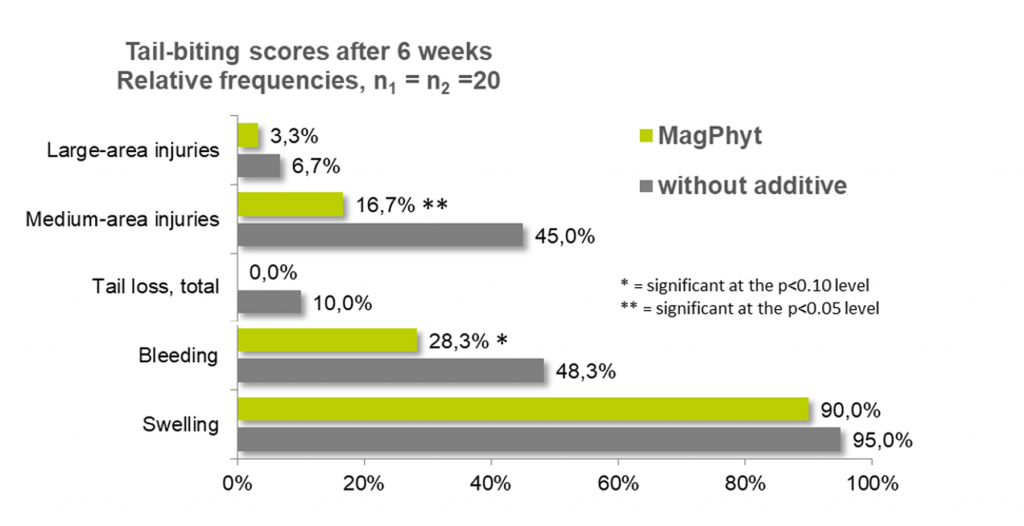 Tail injury occurred in both undocked groups (Figure 2), though less frequently in the group receiving MagPhyt. Injuries in the control group were first to be seen as early as the first week, while those in the feed additive group were observed about one week later. Injuries in both groups increased until the fourth week. At the end of the study, 45% of the animals in the control group showed mild to severe signs of injury. At 17%, this figure was significantly lower in the feed additive group. The average values for the entire experiment were 1.07 in comparison to 0.90.

Values for bleeding rose from the third week onwards. In weeks 5 and 6, significantly better values were observed in the feed additive groups. These were reflected in the lower average values (control: 0.30; treatment: 0.17). Values for swelling increased in both groups as from week 3. However, less severe tail swelling was observed in the treatment group and the increase in poor scores was more gradual (average swelling – control: 0.53; treatment: 0.42). In weeks 3 and 5, significant differences were observed (control: 95%; treatment: 73%).

Support for both animal welfare and performance

The feed additive made from hop compounds and highly bioavailable magnesium sources has been shown to have beneficial effects on both animal welfare and performance.

In the case of the undocked animals, injuries and bleeding associated with tail biting occurred later and less frequently, and were less severe when the feed additive was used. Thus, the study showed that MagPhyt can be regarded as a complementary measure in supporting productivity and animal welfare.

With its animal welfare initiative, Dr. Eckel supports all the stakeholders along the value chain by improving crucial animal welfare parameters—starting with feeding—thus fulfilling social expectations and promoting animal performance. The aim is to develop sustainable solutions that are suitable for animals, humans and the environment.