In most countries of the world, animal welfare is increasingly becoming a major concern. This poses a challenge, when we look at the potential threats to the animal as well as to the livestock producer. An important aspect is the stress level of the animal. Stress is considered an environmental impact, which overloads the nervous system. This has a negative effect on the animal, causing suffering and behavioural changes. These factors can be regarded as an indicator for animal welfare. Large-scale commercial piglet production comes with a number of potential stressors, such as handling, stocking, transportation, ranking fights, heat and high humidity, poor air quality and lack of materials for rooting and playing. One of the behavioural indicators for this is tail-biting (caudophagy) in production systems where tail-docking is omitted due to animal welfare policies. This will e.g. occur increasingly in the EU in the future, as the aim here is to reduce tail-docking. In addition to long-term and fundamental changes of the system (building, management, ventilation, group sizes) pig producers have a need for supportive measures on the farm to improve animal welfare. One solution could be a novel type of feed additive, which increases the stress resistance of the animals.

Hops (Humulus lupulus) is known for its calming and stress-reducing effect and is used as a traditional natural medicine for humans. Several different mechanisms are seen to be responsible for this effect. The main mechanism is an increased activity of the neurotransmitter gamma-aminobutyric acid (GABA) in the central nervous system by affecting receptors in the brain. This sedating effect supports a good night time rest.

For decades, Magnesium has been considered as an anti-stress mineral and the dietary supplementation with magnesium shows several effects. It reduces stress-related hormones, e.g., in pigs during transport. Especially highly bioavailable magnesium sources reduce stress indicators in pigs, e.g., blood cortisol and meat colour. It is assumed that magnesium supplementation improves the ability to cope with stress by inhibiting pathways of the nervous system.

The hypothesis of this study is that a feed additive composed of hops and highly bioavailable magnesium (MagPhyt) has a calming effect on rearing pigs and thus leads to reduced severity and occurence of tail-biting in long-tailed animals. The goal of the trial was to measure frequency and severity of indicators of stress-related tail-biting in rearing pigs post weaning and assess the influence on performance.

The effectiveness of MagPhyt was confirmed by an independent study at the Bavarian State Research Centre for Agriculture (LfL), Germany. This feed additive is a combination of specifically selected compounds from hops and highly bioavailable magnesium in its fumarate and acetate salt forms (provided by Dr. Eckel Animal Nutrition, Niederzissen, Germany).

80 piglets were equally allocated into a 2×2 factorial design (short-tail/long-tail x with/without additive, see Table 1). Feed was provided via automated feeding stations with integrated weighing of each individual animal and the live weight (lw) was recorded weekly for the individual animal.

Two feeding phases were applied for all animals (Phase 1: up to 16 kg lw; Phase 2: up to approx. 28 kg lw). The control diet was based on wheat, barley and soybean meal and the additive was used at a rate of 4 kg per ton in exchange for wheat. By including the feed additive, the magnesium content of the diet increased from 2.2 to 2.8 g/kg in Phase I and from 2.2 to 2.6 g/kg in Phase II. The weekly scoring of the faeces, which was conducted because higher magnesium levels potentially have a negative effect, showed that the consistency was normal in all groups (grade 2).

Table 1: Experimental setup of the study

In the piglets of group 1.2 and 2.2 (long-tailed animals) the degree of tail-biting was assessed twice a week by the same person. The applied tail-biting scoring scheme was established by the Bavarian State Research Centre for Agriculture in previous studies.

Table 2: Rating scheme of tail injuries by piglets without tail-docking

The average daily gain of the groups over the entire trial is shown in Figure 1. It was observed that the groups receiving MagPhyt performed better than the respective control groups and both tail-docked groups showed a higher daily weight gain compared to the undocked piglets. Overall, the daily weight gain of the tail-docked piglets receiving MagPhyt was significantly higher in comparison to the other groups (+10.6 %, compared to tail docked control). Another remarkable result was that this feed additive enhanced the performance of the undocked piglets, up to the level which was achieved with the tail-docked animals. 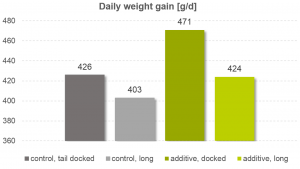 Injuries occurred in both groups without tail-docking (figure 2), but the group receiving MagPhyt was affected to a lesser extent. In the control group, the first injuries were already visible in the first week. In the treatment group, first injuries were observed about one week later. Injuries increased in both groups up to the fourth week. At the end of the trial, 45 % of the animals in the control group showed mild to severe signs of injuries. In the treatment group with feed additive, a considerably lower share of 17 % was observed. The mean values of the whole experiment were 1.07 versus 0.90.

Figure 2: Rating grades during the course of the trial (injuries, bleeding, swelling) of undocked piglets with MagPhyt and without feed additive 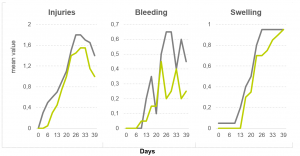 Bleeding scores increased from the third week on. In weeks 5 and 6, significantly better scores were determined within the feed additive groups, which are reflected in the lower mean scores (control: 0.30, treatment: 0.17). Swellings increased from week 3 in both groups. However, less severe incidences of tail swelling were observed in the treatment group and the increase of poor grades was slower (mean swelling score, control: 0.53, treatment: 0.42). Significant differences were determined in weeks 3 and 5 (control: 95 %, treatment: 73 %). 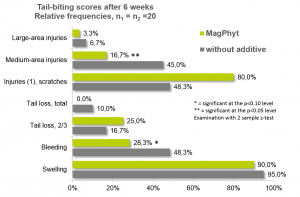 In comparison with the control group, all scoring parameters in the treatment group improved. Consequently, the treatment with the feed additive had a positive effect on these stress-related behavioural problems.

Supplementation of the feed additive MagPhyt, made from hop compounds and highly bioavailable magnesium sources, had a positive effect. The feed consumption and daily weight gain within the tail-docked and long-tail piglets increased in comparison to the respective control groups. The long-tail piglets receiving this feed additive achieved the same daily weight gain as the tail-docked control group. The tail-docked piglets showed, with MagPhyt, a higher daily weight gain. In animals without tail-docking, injuries and bleedings related to tail-biting occurred later, less often (reduced incidence) and less pronounced (reduced severity) when the feed additive was used. In conclusion, it can be stated that MagPhyt can be regarded as a complementary measure to cope with productivity and animal welfare challenges in pig production systems.