The steadily growing demand for poultry meat, in combination with increasing consumer concern for animal welfare, is a major challenge for broiler producers. Substantial progress in fulfilling these requirements was achieved in terms of performance and livestock management. Nevertheless, modern animal nutrition strategies can further improve efficiency and animal health. This applies to phytogenic feed additives in particular, which are known for their positive effects, especially in challenging conditions. Highly sophisticated livestock farming already offer conditions of a high standard. Hence, the object of this study was to evaluate whether the plant-based additive Anta®Phyt also improves performance and broiler health under optimal conditions.

A total of 25,000 broiler chicks (Cobb 500) were randomly assigned to two dietary groups with two replications. The birds were fed experimental diets based on corn and soybean meal with or without the phytogenic feed additive Anta®Phyt (200 g/tonne, Dr. Eckel Animal Nutrition GmbH & Co KG). A three-phase feeding programme was applied from day 1 to day 42. Feed and water were provided ad libitum. Body-weight gain, feed intake and feed conversion rate were determined on a weekly basis. A one-way ANOVA was used for the statistical analysis.

The feed conversion rate of the treatment group was superior to that of the control at any measured point (1.61 ± 0.20 vs 1.66 ± 0.10 g/g, 42 d; Fig. 1). The treatment group also showed better growth performance in terms of live-weight gain (1,820 ± 200 vs 1,745 ± 150 g, p = 0.08; Fig. 2). In both groups, the broilers showed good health and cumulative mortality was low (2 %). However, the treatment with the phytogenic additive led to even lower mortality in the last two weeks (0.5 % vs 0.7 %), such that a lower total live-weight loss was achieved. These improvements result in an enhanced European Production Efficiency Factor (EPEF) for the Anta®Phyt group (529, +12 %; Fig. 2). Effectiveness of a phytogenic feed additive on growth performance of broiler chickens raised under optimal health conditions.

The trial outcome shows that the addition of Anta®Phyt can improve broiler performance (live-weight gain and FCR) in comparison to the control group. Additionally, this phytogenic additive had a supporting effect on broiler health and liveability. Thus, the application of Anta®Phyt has the potential to improve the overall profitability of broiler production, even under optimal environmental conditions. 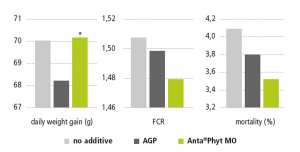 Fig. 1: Feed conversion rate in the negative control and Anta®Phyt

Fig. 2: Live-weight gain and EPEF of broilers in the negative control and Anta®Phyt