Mycotoxins account for huge economic losses. It is estimated that 25% of crops worldwide are affected, leading to annual losses of up to 1 billion tonnes and billions of euro. These economic losses derive from:

c) sampling, analysis and prevention; and

No poultry feed is completely free of mycotoxins and, in contrast to the majority of scientific trials, more than one mycotoxin is present in practice. Since multiple mycotoxins have a mutually reinforcing effect, they have a more severe impact on the health and performance of the animal under practical compared to laboratory conditions. Therefore, to make the right choice of mycotoxin binder, it is crucial to also evaluate binders’ effectiveness in field trials using naturally contaminated feed.

To compare the effect of different mycotoxin binders, day-old broiler chicks (as hatched, Cobb 500, starting weight: 37 g) were allocated in four groups receiving four different diets over a period of 36 days. In addition to a control group (without a mycotoxin binder), three different commercial mycotoxin binders were tested at the same dosage: Anta®Ferm MT80; product 1 based on yeast cell walls; and product 2 based on mineral clay. As expected, analysis of the feed shows the occurrence of multiple mycotoxins (Table 1). 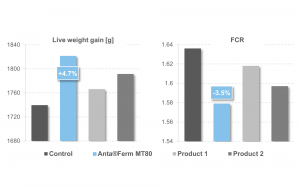 Figure 1: Live weight gain (starting weight: 37 g for all groups) and FCR over the whole trial

Be aware of nutrient interactions

Mycotoxins have a detrimental effect on the utilisation of nutrients: impacts on vitamins, proteins, fat and fibre have been described for various animal species. For example, aflatoxicosis leads to low activities of pancreatic trypsin, lipase and amylase in broiler chicks. In addition to the effect of mycotoxins on digestibility, mycotoxin binders are assumed to interact with nutrients. This is a valid concern, as unselective binders might not only bind a broad range of mycotoxins but also a large variety of valuable nutrients. 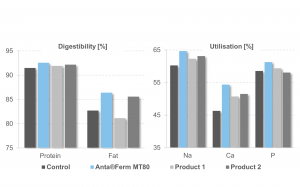 Figure 2: Digestibility and nutrient utilisation in the trial

The higher digestibility values indicate a lower interaction between nutrients and mycotoxins due to a higher mycotoxin binding capacity, which ameliorates their impact on animal health and digestion. Furthermore, the observed parameters demonstrate that Anta®Ferm MT 80 does not bind nutrients and thus has no negative effect on their availability.