Why is it so important for poultry farmers to establish and maintain a healthy gut flora in their birds? Because optimal animal performance without antibiotics requires a healthy intestinal function. This is where PreAcid comes in.

Right after hatching, chicks’s intestines are sterile. As the basis for a functional immune and digestive system, a beneficial microflora in the intestine has to develop quickly. The microflora that colonises the gut during this early posthatch period forms a synergistic relationship with the host. This provides a barrier against possible pathogens and allows the bird to draw on its full genetic potential. Bacterial fermentation in the intestine produces short chain fatty acids (scFA) that are important for nutrient absorption and gut health. Butyric acid in particular has many positive effects that can help the animal to perform well. However, it has to reach the hindgut as well as crop and stomach.

With its special complex—a combination of free butyrate with the prebiotic gluconic acid—PreAcid promotes the production of short chain fatty acids, even in the rearmost parts of the intestines. Thereby it can pave the way towards a healthy gut flora—with all the benefits this entails. PreAcid thus allows poultry producers to improve both animal welfare and profitability of production all at once.

Lead me to PreAcid product page

Scientific details of the study

These beneficial effects of PreAcid have clearly been demonstrated in a recent broiler trial at the Warsaw University of Life Sciences in Poland. In this study, the chicks were divided into two groups. The control group received a wheat and corn based standard diet, the second group the basic diet with PreAcid. After 28 days, the formation of short chain fatty acids was analysed in caecal digesta.

Analysis results document that PreAcid accounts for a higher production of short chain fatty acids in the caecum of broilers (fig 1). The increase in butyric acid formation was 28 % (Fig. 2), leading to a higher share of butyric acid in the scFA profile than in the control (19.4 % vs 17.9 %). 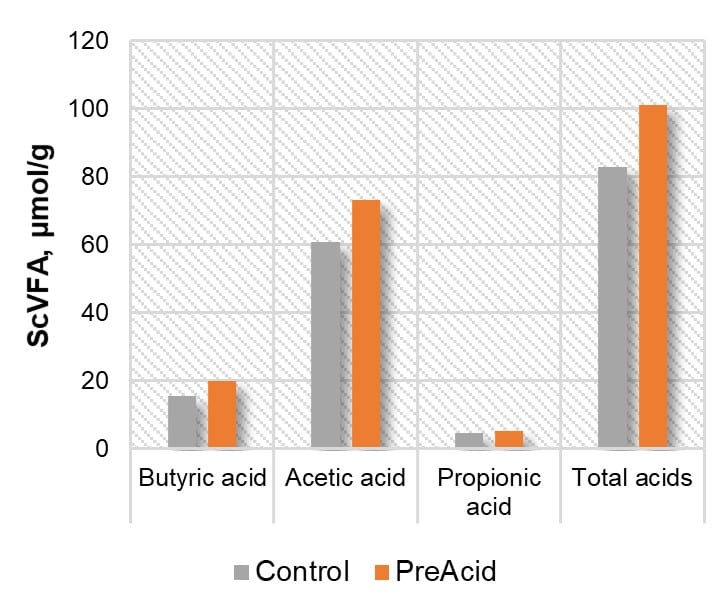 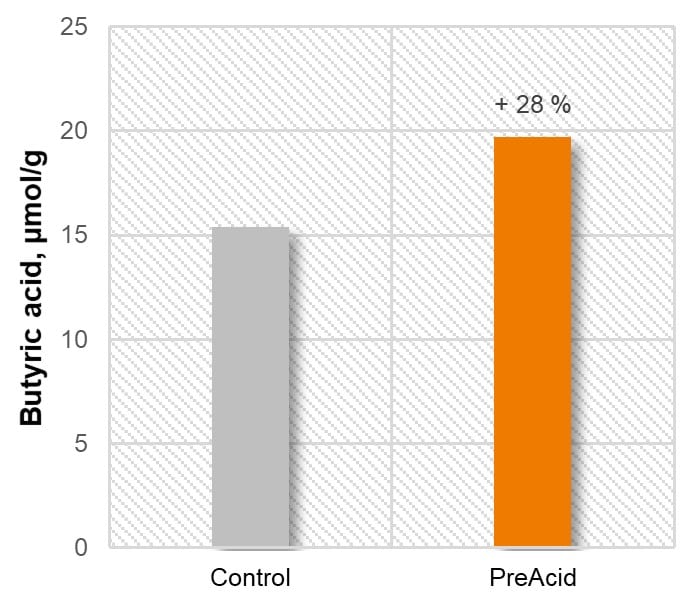 Since chicks are sterile at hatching, it is imperative for producers to quickly establish a beneficial gastrointestinal flora in their animals in order to establish a barrier against pathogens and achieve a better nutrient absorption. The results of the study demonstrate that PreAcid stimulates the production of short chain fatty acids even in the distal gut compartments and therefore allows for an essential basis for a stable digestive system, healthy development and optimal performance.