Dr. Eckel’s Anta®Phyt demonstrates the powers of phytogenics to support the immune defence

At the 22nd European Symposium on Poultry Nutrition from June 10 to 13, 2019, experts convened for one of the most influential gathering in the world. Issues on the agenda included poultry gut health and sustainability goals of the industry. Dr. Eckel contributed to the discussions by presenting recent trial results of its phytogenic power pack Anta®Phyt.

A strong immune system is the precondition for stable health and optimal performance. Indicators for this are, for instance, the natural defence activity, i.e. parameters like phagocytes and lymphocytes. The feeding trial presented at the ESPN in Gdansk shows a distinctly higher activity of defence cells under the influence of the phytogenic feed additive Anta®Phyt. Thus, Anta®Phyt not only supports performance in broilers but also contributes to a strong immune response and thus to less infections and less stress.

The natural defence activity (NDA) of broilers is an often-disregarded parameter despite the key role it supposedly plays in animal‘s ability to withstand pathogens. As this is the basis for a high performance level, the NDA can give indications not only of immune response and health but also for efficient production.

The purpose of this trial was to investigate the effects of Anta®Phyt on the NDA of broiler chicks and the impact on growth performance.

A total of 727 broiler chicks (Hubbard ISA) were divided into two groups. The chicks (5 d – 42 d) had two different feeding phases. Two different experimental diets were formulated for each phase: a basal diet without additive (NC) and a basal diet with Anta®Phyt (400 g/t). After 42 days, the broilers were weighed and slaughtered. 10 animals of each group were randomly selected for blood sampling.

The analysis of the NDA from the blood samples between the Anta®Phyt and NC group showed significant differences (p < 0.05; Fig. 1). The phagocytic activity of neutrophils was increased by 15% due to Anta®Phyt, as were the T-lymphocytes by 19% and B-lymphocytes by 17%. A similar increase was also observed in the lysozyme activity (NC: 47.3% vs. Anta®Phyt: 56.3%). 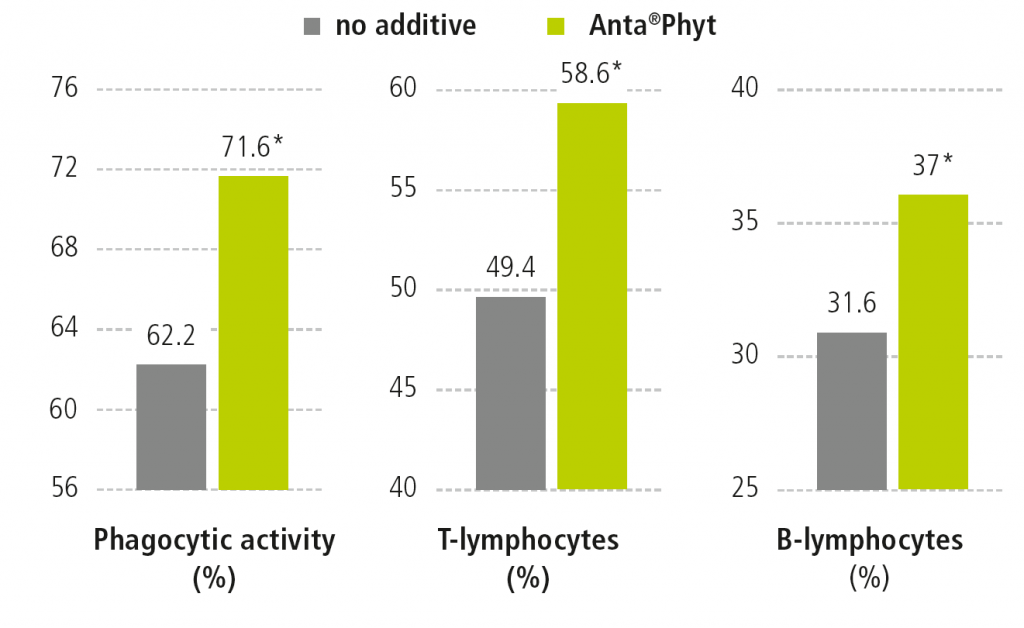 Regarding the growth of the birds, Anta®Phyt demonstrated a supportive effect on performance parameters in comparison to the NC (Fig. 2). The daily weight gain increased by 4.07% while the FCR was improved by 3.91%. 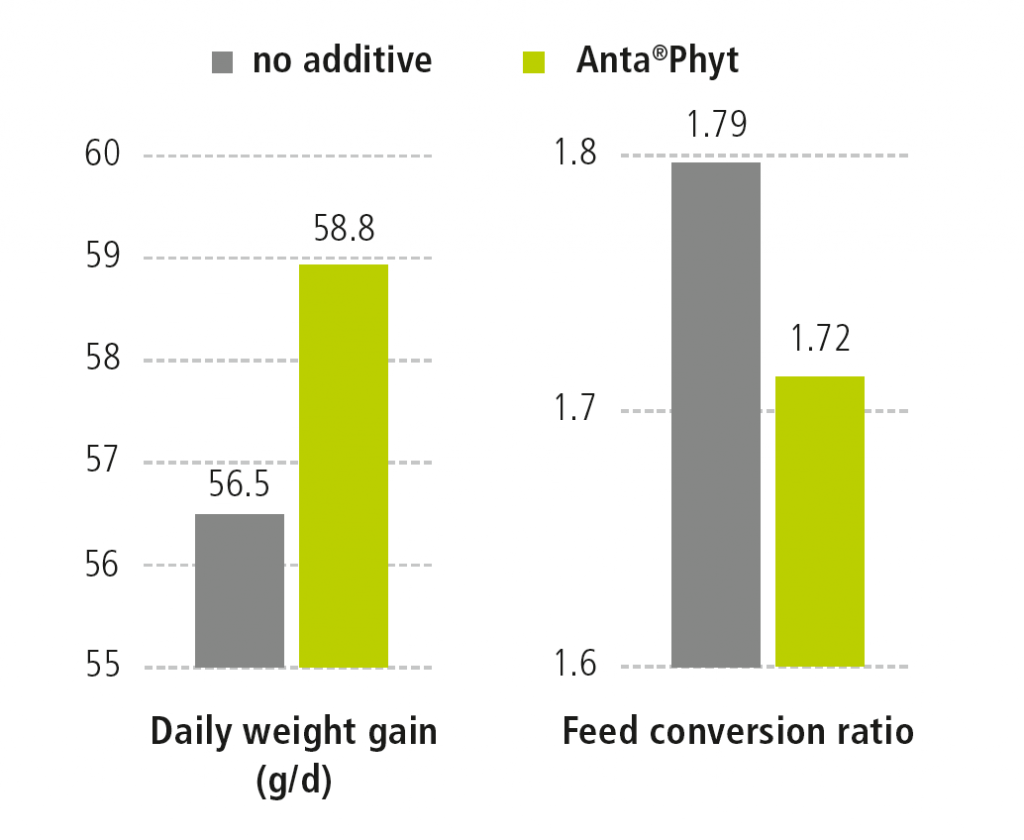 The results of this trial indicate that the phytogenic feed additive Anta®Phyt has a beneficial and significant effect on the NDA of broilers. In addition, Anta®Phyt demonstrated its ability to improve growth performance in terms of weight gain and FCR. Anta®Phyt therefore has the potential to contribute to a healthy and robust immune defence system as well as ideal performance. This is the basis to achieve a high profitability and animal welfare at the same time.