Weaning is a particularly critical phase in pig farming, when the animals are exposed to numerous stressful situations, so it is important for them to receive any possible support right from the start. These stressors, many of which exist on virtually all farms, include rehousing the piglets and mixing the various litters after weaning, and consequently fights for rank. Another stressor is the transition to solid food and the associated adaptation of the gastrointestinal tract: some piglets require up to 48 hours to take their first feed, which initially leads to reduced food intake and subsequently to overfeeding, significantly increasing the risk of diarrhoea.

One strategy is to support the gut microbiota. To date, science has not yet revealed all the interdependences between the gut microbiota and growth performance. However, there is no doubt that the microbiota is strongly related to energy harvesting capacity and resistance to pathogens. We are also certain that bacterial infections and inflammations expend a lot of energy and thus reduce performance. It is mainly for this reason that antibiotic growth promoters (AGPs) came into use both as a safe bet to ensure profitability and in the hope that they would additionally support against pathogenic germs and reduce infections. But nowadays we are aware of the dangers posed by AGPs: they destroy the invaluable natural intestinal flora of animals, impair their well-being, contribute significantly to the formation of antibiotic-resistant bacteria and, consequently, are also a threat to our own health.

Fortunately, more and more countries are coming to the realisation that the inappropriate use of antibiotics to enhance performance in animal nutrition is a dead end. All stakeholders along the value chain—consumers, retailers, producers and farmers—have recognised the need for action. Naturally, in the case of producers and farmers, it all begins with the feed. This is the starting point for anyone wanting to act responsibly and sustainably while achieving optimal performance. We have a powerful ally in phytogenics, which help us do just this.

Of the many phytogenics, let’s take the common hop (Humulus lupulus) as an example. Hops has been used in medicine for thousands of years. It is the ingredient of choice in beer production due to its bitter flavour as well as its antimicrobial and preservative properties. It contains specific phytochemicals with structures similar to those of ionophores—molecules that increase the permeability of cell membranes to ions—which can inhibit gram-positive bacteria, making it a very promising natural alternative to antibiotics in animal feed.

And phytogenic feed additives can do even more: they are truly viable solutions that alleviate stress-related problems, reduce inflammation, support the immune system and ultimately improve animals’ performance. Anta®Phyt is a case in point: it is a phytogenic formulation containing selected hop components and other plant-based ingredients that has been designed to support a healthy microflora in the digestive tract. Numerous studies have shown that Anta®Phyt has a beneficial effect on performance parameters such as daily weight gain and feed conversion, as well as animal welfare parameters.

Improved well-being and performance in animals, healthier and safer products for consumers, increased productivity for farmers, more sustainability and protection for the environment: phytogenic additives promise a lot—and they actually deliver! Results and experience so far show that they really do make a difference in the right combination.

Let us return to our piglets and the challenges of weaning. Here too, phytogenics have great potential. A feeding trial conducted during the rearing period, which also specifically included the first week after weaning, illustrates this. 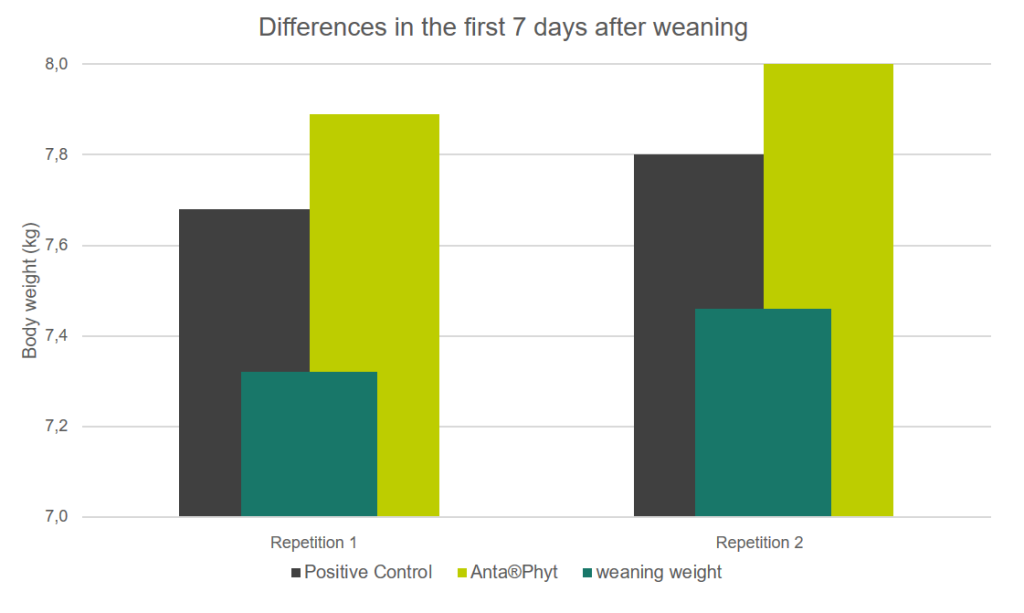 The trial compared the effectiveness of AGPs with that of our phytogenic additive Anta®Phyt. The numbers are indisputable: the group that received the phytogenic additive showed better growth and feed conversion rates than the AGP group. In fact, as early as the first week, this group showed an additional gain of more than 200 g per animal per day. This continued throughout the entire rearing period and led to a final weight of more than 2 kg higher than the control group.

This demonstrates that we can get rid of AGPs, at least in part, and also that we can achieve even better results without them.

Phytogenics are the way ahead—a way towards more sustainable production, less antibiotics, less wasted resources, more safety and health for livestock and humans alike, and more long-term growth and profit for producers. So let’s go for it!