Combating the spread of the African Swine Fever Virus is currently a top priority worldwide. The spread of the virus poses a serious challenge to pig production, with the threat of major losses. Biosecurity measures are designed to prevent the virus from entering the farm. But they must be comprehensive – and that includes transmission via feed.

African Swine Fever (ASF) has proven the biggest threat to the swine industry in recent years. Outbreaks and cases have been reported in five continents and 35 countries so far, and the virus is spreading further, costing billions of dollars for prevention and eradication measures. Prevention is key to control the spread of the disease. Biosecurity measures need to be comprehensive to ensure that there is no gap through which the virus can enter the farm. In most operations, common biosecurity measures, i.e. restriction of people movement, quarantine protocols for incoming animals, pest control and cleaning and disinfecting regimens are implemented and observed.

However, apart from the strict ban on swill feeding, other feed sources are often not considered, though the introduction of porcine epidemic diarrhoea virus (PEDV) into the United States in 2013 demonstrated that swine diseases can be both introduced and transmitted through feed. A recent risk analysis carried out by EFSA (2021) concluded that the virus can survive in some animal feed types for up to 30 days and can be transmitted via mash and pelleted compound feed as well as certain feed additives. This possibility of transmission via the feed constitutes a gap in the existing biosecurity measures that needs to be closed.

Restricting use of raw materials sourced from regions that are affected by African Swine Fever is recommended but may not always be feasible. The removal of African Swine Fever virus carried in feed therefore has a high significance for the industry and should be part of any risk analysis carried out in feed mills and farms. In fact, in their scientific opinion, the EFSA panel recommends “strict adherence to relevant decontamination and storage processes for all products moved from ASF-affected areas to unaffected areas” (EFSA Journal 2021, doi: 10.2903/j.efsa.2021.6558).

These relevant decontamination processes may include heating feed or ingredients to 70°C for 30 minutes. Holding feed and ingredients for a suitable amount of time would be another possibility to ensure save feed. But all these measures have their own drawbacks. This is why in recent years various feed additives have been studied for their potential to mitigate the transmission of swine virus via the feed. These additives include chemical products like formaldehyde and organic acids. However, formaldehyde is highly controversial due to worker safety concerns and application is limited in the EU. Are there more natural and sustainable options?

A new phytogenic feed formulation created by Dr. Eckel Animal Nutrition GmbH & Co. KG (Anta®Shield) makes use of powerful bioactive plant metabolites derived, among others, from hops. Some of these components have been cultivated for thousands of years for the very purpose of securing food from pathogens. Modes of action known for these metabolites include the destabilization of bio-membranes from gram positive bacteria.

Since the ASF virus is an enveloped virus with a similar outer glycopeptid layer, Dr. Eckel considered the possibility that selected plant metabolites might also be able to reduce the infectivity of the African Swine Fever virus. This would be a significant step in reducing the risk of ASF transmission via feed by natural and sustainable means.

An in-vitro study was conducted to test the effect of plant extracts and Anta®Shield against infectivity of African Swine Fever Virus in feed. The results were compared to an organic acid blend. In the screening test, a commercial compound feed for fattening pigs was supplemented with the test substances and infected with African Swine Fever virus in a dose that was considered sufficient for causing infection in swine. After incubation for one, three or seven days, the samples were analysed by cell culture method (haemadsorption dose, HAD50) for observation of infectivity. In a further step, the quantity (Ct values) of ASFV was determined by commercialised Realtime RT-PCR.

The ASFV titration assay showed that organic acids and the selected plant ingredients reduced the viral titer in the feed already after 24 hours (fig. 1). By day three, the viral HAD50 titers in all samples treated with either the plant extracts or combinations thereof were below the detection limit of 1.5 log10HAD50/ml. With the organic acid treatment, it took seven days to achieve the same result.

In a second test, PCR assays were used to determine the presence of viral DNA after one, three and seven days. After three days, virtually no viral DNA could be detected with Anta®Shield, while, again, it took seven days in the organic acid group (fig. 2). 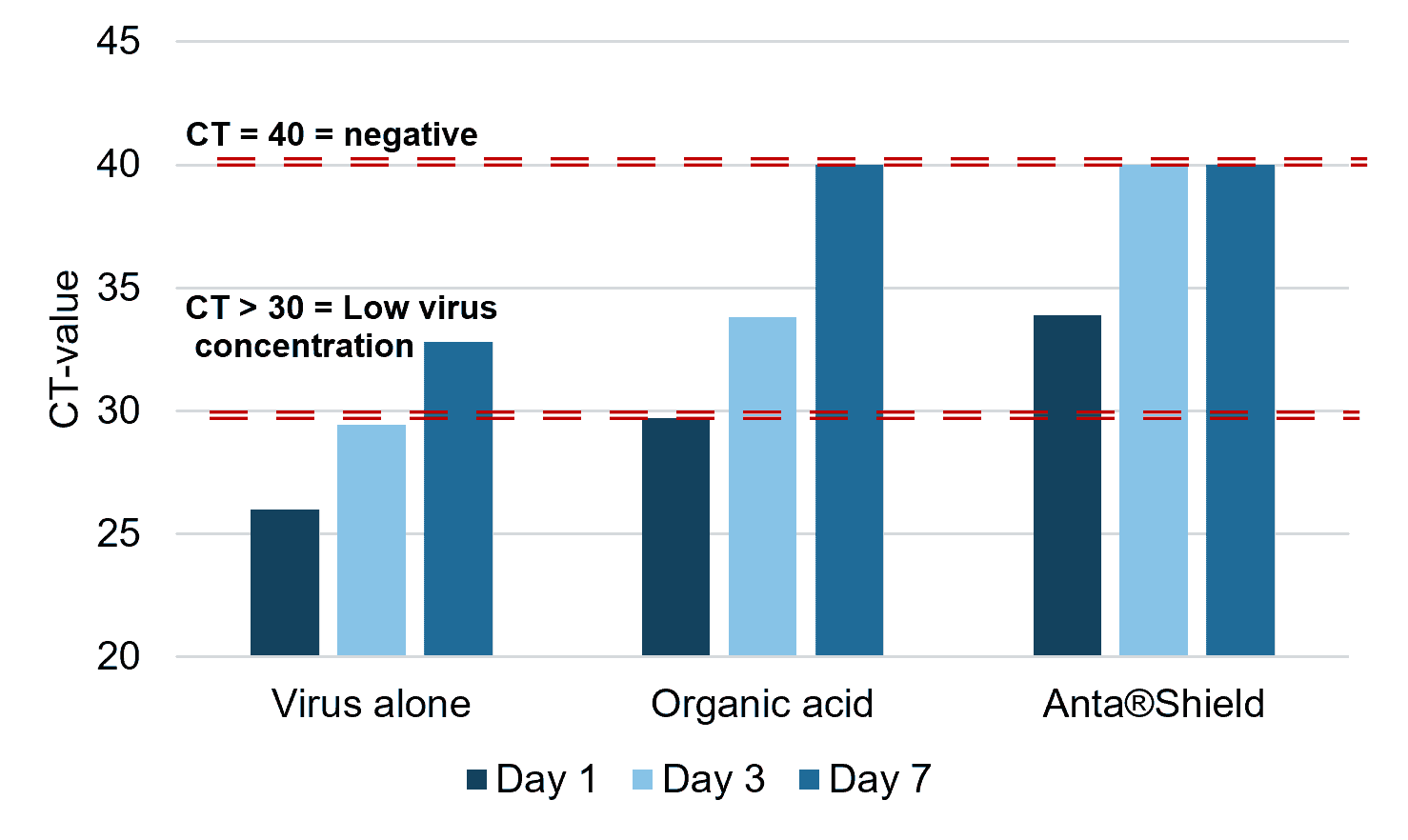 These results show that the AFS virus stays viable in untreated pig feed for several days. After seven days the viral load was still high enough to potentially cause infection in swine. However, we also saw that mitigating additives can reduce viral load and infectivity in feed. Each of the tested plant extracts showed greater efficacy than the organic acid treatment in the comparison group. Most effective was the natural feed formulation Anta®Shield, reducing infectivity by more than 99% in the first 24 hours. In practical terms, this translates into a significant reduction in the risk of infection through feed. The synergistic activity of the chosen ingredients makes the phytogenic feed formulation Anta®Shield especially effective already at low dosages.

Feed can play a role in transmission of African Swine Fever Virus. Natural, plant-based formulations such as Anta®Shield can be part of the solution to avoid the transmission of ASFV via the feed route. This is a small but still important part in a comprehensive biosecurity plan to prevent the further spreading of ASF.